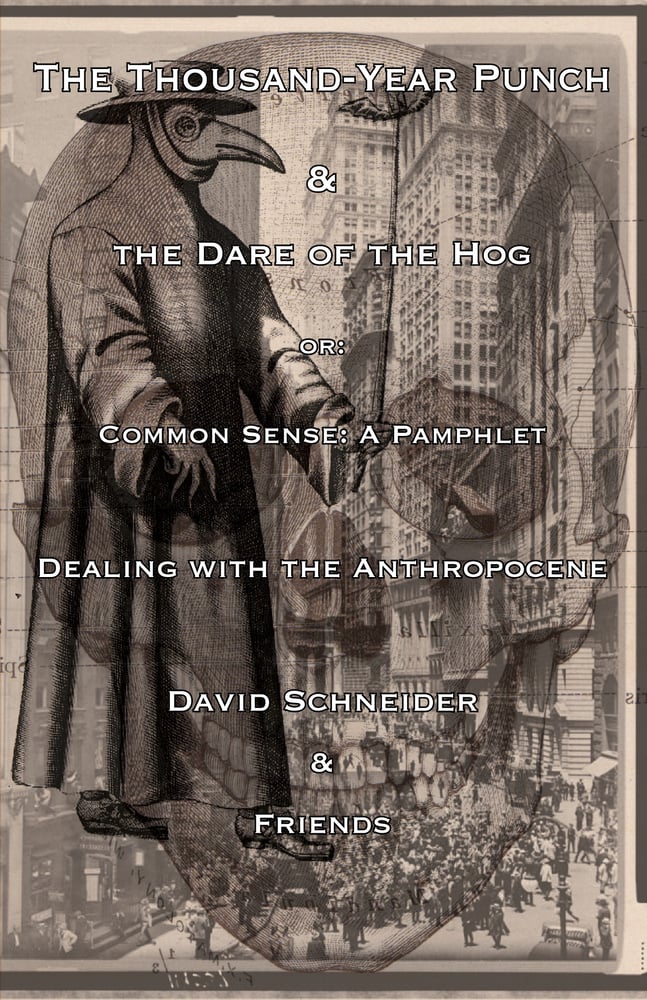 'the thousand-year punch' by david schneider

'the thousand-year punch' by david schneider is a series of essays exploring the changes of consciousness we need to make, in America, and as human beings, in order to deal with the climate crisis. This braided series gathers together a number of threads and makes a very sharp point, situated within historical facts. It binds together American movies and popular culture, medieval history, English history and poetry, and basic understandings we should understand, about where we’ve been.

Part II will speak about where we’re going.

inside are collages & grace pages made from painted 19th century dictionary pages by aaron howard.

The Thousand-Year Punch
&
the Dare of the Hog
or:
Common Sense: A Pamphlet

Dealing with the Anthropocene

David Schneider has been a professional writer in various modalities for over 20 years. His most recent research and writing topics concerned the beginnings of graphic advertising and political propaganda in 1880s-1940s Europe, Russia, and America. Prior to that, he worked on Ogilvy’s “Let’s build a smarter planet” campaign for IBM. He’s also been a copywriter for global cultural travel companies. He was a columnist for 3quarksdaily.com and an electronic music / dining / architecture / design critic for Chicago’s Newcity. He earned his MA in English Literature from the University of Oxford, with study at Middlebury College, and the Medill College of Journalism, Northwestern University. He's from South Florida and Lives in New York City.